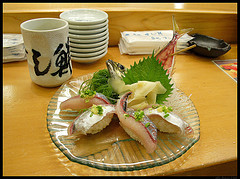 Here is the last installment of this mini-series. I found a couple more interesting points in the Russian Bear’s post and here they are.

Sushi in Kyoto on Shijo street, next to the river are to die for. That is the sushi heaven. Whatever you do, don’t eat the sea urchin roe in the raw; it will make you puke. However, the rest of the food is delicious, not spicy, and looks quite healthy.

I have never been to these places but I do know for a fact that sushi abounds in Japan. You can even go to 711 and buy great sushi and sashimi for a good price – can you believe that? Of course, I would probably be under fire for saying that 711 sushi and sashimi is great but I just had to say that. It is really amazing!

The Japanese don’t only drive, but also walk on the left. It is hard, but important to remember, or else you will run into people all the time.

The reason I picked this point is more because I wanted to emphasize the fact that the Japanese will not drive unless they need to. Even company CEOs would take the public transportation to work on a daily basis. The reasoning is that they do not want to spend money when there is a perfectly reasonable option. I guess that is why they are successful in general.

We sure could learn a lot from the Japanese culture, couldn’t we?