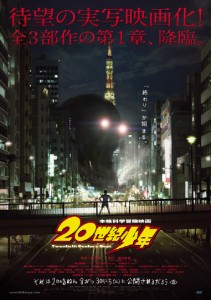 Manga is something that many people outside of Japan have come to love and the 20th Century Boys is a manga series that has captured the interest of countless people. This manga was created by Naoki Urawasa and is, in fact, a science fiction mystery. 20th Century Boys has won many awards, including:

At the end of this month, on August 30, manga fans in Japan will be treated to the movie version of 20th Century Boys. Considered to have a big budget, the movie is adapted from the original manga
series described previously. Lunapark reports:

“20th Century Boys” will come out as a three part trilogy and cost a reported $60 million to make. The film stars Toshiaki Karasawa, Toyokawa, Etsushi, Takako Tokiwa. The film also features a large cast of supporting actors that will total over 300 by the conclusion of the trilogy.

The movie itself deals with a doomsday scenario, with a group of men battling the devil himself to prevent the end of the world. More specifically, a group of boys in the 1960’s wrote the “Book of Prophecy,” envisioning a doomsday scenario with the boys fighting evil forces to save the world. Years later, their predictions start to come to fruition and those boys, who are now adults, band together to fight the mysterious cult figure known as “Friend.” The movie takes place over a 40 year period and has been filmed in many locations throughout the world.