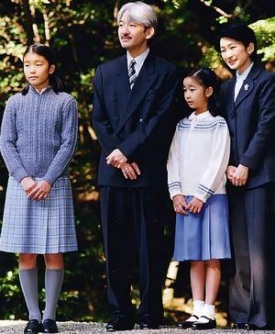 There had been speculations in the Japanese media about the possible gender of the new Imperial baby, but we’ve just received the happy news today : a boy has been born to Prince Akishino and Princess Kiko of the Japanese Imperial Family. An Imperial Household Agency official told reporters that Princess Kiko had given birth by Caesarean operation to the 5.64 pound boy at 8:27 a.m in central Tokyo.

The boy is the first male heir born in more than forty years. He is now be third in the line of succession to the Japanese throne, right after his uncle, Crown Prince Naruhito, and his own father. The new prince ranks above four-year-old Princess Aiko, the only child of Crown Prince Naruhito, and his two older sisters. His birth was greeted with widespread celebration and sake toasts among the public. Ceremonies connected to his birth included the laying of a tiny sword near his pillow to ward off demons. He will be named next Wednesday by his father, seven days after his birth.

The birth will likely derail the proposed amendment to the 1947 succession law to allow women equal rights to the succession. The current law only allows males to ascend to the throne. Early this year Prime Minister Junichiro Koizumi’s proposal were put aside after the announcement of Princess Kiko’s pregnancy, raising the possibility that a boy could be born. Despite the birth, the call for change cannot be ignored. Surveys conducted has shown that even though traditionalists still favor the old law, there are many who agree to giving women equal rights to the throne.