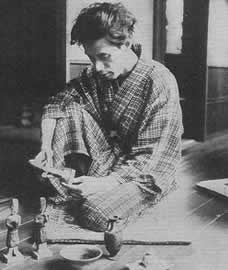 One of the very first Japanese short stories I read was Akutagawa Ryunosuke’s In a Grove. This classic murder mystery of conflicting eyewitness accounts reveals the psychological depth that Akutagawa is capable of. Though he never wrote a full-length novel, his collection of short stories establish his reputation as one of Japan’s premier prewar writers. He is also one of the first Japanese writers to achieve Western readership through his reinterpretations of traditional tales with modern dramatic narrative.

Akutagawa was born in Tokyo on March, 1892. When he was a few months old he was adopted by his maternal uncle after his mother went insane. It is with his adoptive parents that he grew to love literature. In school he read Chinese classics, the works of contemporary Japanese authors like Ogai and Soseki, and discovered the short stories of Kipling, Maupassant, and other Western writers. He entered Tokyo Imperial University in 1813, taking up English Literature. He published his first short story (Ronen) in 1914, but it was two years after when he published his story Hana (The Nose) that he drew praise and acclaim.

Akutagawa married in 1918 and fathered three sons, supporting his family as an employee for the Mainichi Shimbun. This was his most productive period, with short story collections published every year. It was while he was working in the newspaper that he took a four month trip to China and Russia. Akutagawa suffered a series of illnesses during this trip, and his health never recovered. This, coupled with a deepening depression, drove him to commit suicide in 1927 through an overdose of barbiturates.

In 1935 the Akutagawa Prize for short story was established by his long-time friend, Kikuchi Kan. This is now one of the most coveted prizes of new writers.