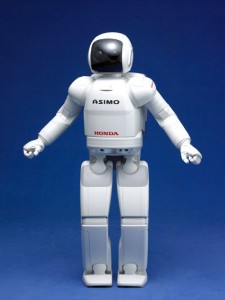 This is the stuff that science fiction is made of. Just think of a command, and an electronic gadget will execute it for. Need to open the garage door? Just think it. How about moving an object? Think it.

This is what the people over at Honda are working on. Japan Today has a story on it:

Honda Motor Co has developed a way to read patterns of electric currents on a person’s scalp as well as changes in cerebral blood flow when a person thinks about four simple movements – moving the right hand, moving the left hand, running and eating.

Honda succeeded in analyzing such thought patterns, and then relaying them as wireless commands for Asimo, its human-shaped robot.

In a video shown Tuesday at Tokyo headquarters, a person wearing a helmet sat still but thought about moving his right hand; the  thought that was picked up by cords attached to his head inside the helmet. After several seconds, Asimo, programmed to respond to brain signals, lifted its right arm.

I am sure that you still remember Asimo, the human robot that we have been seeing a lot. There are some issues with the technology, however. For one, thought patterns are different for each person. As such, the electrical signals emanating from one person’s scalp may differ. This would mean calibrating the device for each single user.

Still, this is a very good start to what we used to think would be only seen in movies and books, don’t you think? 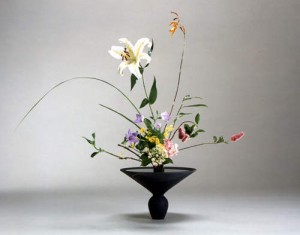 What do you do when you feel that the stress of your every day life is getting to be too much? Some men turn to sports: basketball, soccer, football, etc. Others sit in front of the TV to watch shows, movies, or play video games. I know some men who would hit the gym. And there are those who go to the kitchen and cook up a storm.

In Japan, the trend is for men to do something quite different: ikebana. If you’re not familiar with this term, it is the Japanese word for flower arrangement. The literal English translation of ikebana is “the way of the flowers”.ť Obviously, this art has been dominated by women and dates back to more than half a century ago.

As with most everything, though, the tradition is slowly changing, and more and more Japanese men are turning to ikebana for some stress relief. Actually, let me correct myself – this art started with male artisans but became dominated by women. This new trend then is actually a going back to roots sort of thing.

The idea behind ikebana is simple: to establish harmony and the sense of being one with nature. The styles are minimalist and the activity itself is conducted in silence. You can easily see how stress-relieving the whole thing can be. It is thus no wonder that more Japanese men are practicing the traditional art of flower arrangement these days. And more than busting all that stress away, you get to have a beautiful home! 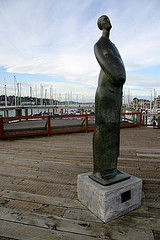 As if carrying a child inside one’s self is not hard enough already, pregnant women can actually encounter difficulties when availing of other services – well, at least in Japan. Come to think of it, though, not all establishments are equipped with pregnant women-friendly services. That is why Ryoko Tsukuda thought of creating the Maternity Plan,ť which is a program geared towards making life comfortable for those who are with child.

Her brainchild is the product of a personal experience. When she was pregnant, she tried to make reservations at a hot spring resort for herself and her mother. However, when the management found out that she was pregnant, she was informed that she could not use the common bath. As she was working for Kinki Nippon Tourist Co, she thought of coming up with a travel plan for mothers-to-be like herself. Her company bought the idea easily and launched the program February of last year.

What Ryoko Tsukuda did was to visit inns, hotels, and other establishments that have facilities that are suitable for pregnant women. To date, the travel plan is experiencing continued success.

There are also other establishments like Hiromaru Taxi Co which cater to pregnant women. In April of this year, they launched a program called Jintsu 119. The idea is to have women register their home address and hospital in advance. When the time comes to give birth, a taxi will be sent immediately to take the woman to the hospital. 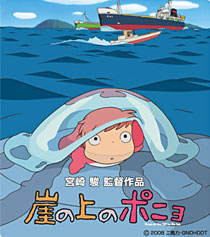 Gake no Ue no Ponyo, which is literally translated to English as Ponyo on the Cliff, is the brainchild of Hayao Mizayaki.

Hayao Mizayaki is not a stranger to anime fans. In fact, he is considered to be the king of Japanese anime. With his countless successful works, this is not a surprise. Just to name a few of his creations:

His latest, Gake no Ue no Ponyo, is no less than a hit as well. With more than 1.25 million people watching it on its opening weekend, the movie earned almost 1.6 billion yen!

So what is this about? The Japan Times narrates:

The title character, Ponyo (voice by Yuria Nara), is a girl fish with a human face who decides one day to leave her underwater home – and her school of smaller sisters – to see what lies on the surface. Riding on the back of a jellyfish, she is nearly trapped by a drift net, but escapes – with her head stuck in a glass jar. Sosuke (Hiroki Doi), a boy who lives on a house on a seaside cliff, spots Ponyo in the shallows and rescues her. He is delighted with his new pet and Ponyo is delighted to be in the human world at last. She says her first words, to Sosuke’s astonishment, and begins a transformation from half-fish to human.

I’ll stop there in case you haven’t watched it yet, and if that is the case, you really need to get your hands on a copy. 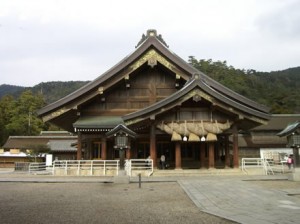 One of the most important aspects of the Shinto religion is the shrine, the place where the gods are ensconced and where those who practice the religion go to worship. In Japan, there are countless Shinto shrines, some of which are considered World Heritage Sites. Among these shrines, one of the most famous is Izumo Taishi, or Izumo Grand Shrine in English.

Izumo Taishi is actually considered to be the oldest Shinto shrine in Japan today and is frequently visited by those who practice Shinto and tourists (local and foreign) alike. Aside from being the oldest Shinto shrine in Japan, Izumo Taishi also has the distinction of following a purely Japanese architectural style. This style is called Taisha-tsukuri.

The Grand Shrine is located in Taisha in the Shimane Prefecture. It hosts two major festivals – the Imperial Festival held on the 14th of May and the Grand Festival on the 14th and 15th of May. Izumo Taishi is dedicated to the nephew of the Sun Goddess, whose name is Okuninushi no Mikoto. Okuninushi is actually considered to be the god of marriage and because of this, visitors to the shrine are supposed to clap four times (instead of the usual two that is required when visiting shrines) â€“ the first two are for the person doing the action while the second two are for that person’s partner.

Izumo Taishi was renovated some months ago and visitors were given the chance to visit the most sacred of places – something that is not normally done. After the renovations are done, however, the usual closed sections will go back to being barred from the public.