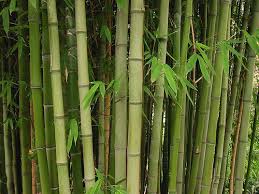 The bamboo tree has long occupied a preferential spot in Japan in terms of being afforded respect and reverence.  To the Japanese, the bamboo represents strength, endurance, and resiliency in its ability to bend in a strong storm and avoid breaking.  The bamboo has been part of the life of the Japanese in many aspects of daily living.

Bamboo is commonly used in the Asian continent as an animal food source and as a raw material in different products including building materials.  It is an ideal raw material since it is a fast growing plant thus supply is not a problem, although the condition of the local soil as well as climatic conditions may sometimes affect their growth.  Japan has one of the most ideal conditions for bamboo growing.

Bamboo is most often seen in Japanese households as part of their garden.  It is seen as an ideal element in a place that can induce serenity in reflection and meditation.  Combined with pine and plum trees, bamboo completes the so-called “Three Friends of Winter”, which represent longevity, pure spirit, and flexibility, respectively.  Bamboo is also used in Japan as a preferred material for bows and arrows, as well as household items including blinds and chopsticks.

Bamboo also plays a big role in the Japanese tea ceremony as well as arrangements in shrines, temples, and other places considered sacred by the Japanese.  Other products that use bamboo as a material include musical instruments, vases, and even fences.  For all this seemingly wide acceptance of the Japanese for the use of bamboo, it is quite perplexing why bamboo flooring is relegated to favor plywood.  This is quite unfortunate since the use of bamboo flooring is considered an environmentally-friendly flooring alternative.

Commercial timber is derived from bamboo which has reached its optimal strength.  It has to be noted that bamboo’s durability will depend on its handling from planting to the maintenance of the finished product which used it as a material.  Suitably treated bamboo is made into sheets and planks.  Laminated bamboo flooring has experienced a surge in popularity together with other products made from bamboo laminates.

Bamboo floorings are attractive and may come in different colors or color stains.  Modern versions can now be easily installed to complement the look of the house.  Opting for bamboo flooring is considered an investment towards a lifestyle that is eco-friendly.

Nenita of Builddirect.com is an interior designer specializing in Japanese styles.