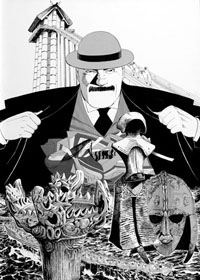 If anyone has ever doubted the artistic and cultural value of manga, then the time to throw away those doubts is NOW. The British Museum – no less – is holding an exhibit featuring the work of Hoshino Yukinobu, famed Japanese manga artist. His most famous character, Professor Munakata is the highlight of the exhibit, which also shows the best drawings of the artist.

In the most basic terms, manga refers to Japanese comics and cartoons in print form. This art has a long history, and has emerged to be one of the most popular forms these days. Its topics are not limited to a single genre but encompass a lot of subjects including romance, sports, action, adventure, business, and even sexuality.

Hoshino Yukinobu’s exhibit at the British Museum can be found in a room near the entrance. Visitors will not miss it as there is a larger-than-life picture of the famous Professor wearing a costume dating back to the 7th century.

Aside from the inherent cultural and artistic value of Hoshino Yukinobu’s work, why is the British Museum holding an exhibit for him? For Japanese culture lovers in the UK, you will be happy to know that the Museum is also holding an exhibit on ceramic figures (dogu) dating from ancient Japan. This exhibit will be open till 22 November.

Even if you are not (yet) a fan of Yukinobu’s work, you might want to drop by the Museum and check it out. There are also manga comic books available for your perusal – you never know, you just might find a new hobby!

Photo courtesy of The British Museum