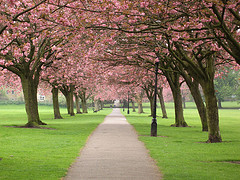 Japan has long been known for their cherry blossoms.

In fact, it is a matter of honor for the Japanese. For hundreds of thousands of years, cherry blossom season has been observed as an important ritual for the Japanese as well as people from all parts of the world. Indeed, many travelers choose this season to visit the country. And why not? The beauty of the cherry trees blossoming is something to behold – an experience not to missed.

This time, the Japanese government is carrying their pride and honor to another level. Cherry seeds are set to be sent out into outer space. The Japanese Aerospace Exploration Agency, or JAXA, has just approved a proposal for cherry seeds to be sent to the International Space Station which is orbiting the earth. There is currently a Japanese laboratory at the Space Station.

The people behind the proposal belong to the Japan Manned Space Systems Corporation, which is a private group of companies. Their idea is to send the cherry seeds to the Space Station in order to find out the effects of being in outer space on them. They will be staying in outer space for six months.

Of course, there is more to it than that. The cherry seeds will be traveling to space together with other seeds such as lilies and violets. According to Yuko Otake, a spokeswoman for the consortium, “Scientific observation is one reason. But we also want the seeds to travel in space on our behalf as few ordinary people can go now.”