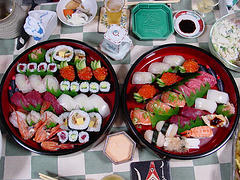 What can I say? I love sushi and tonight, I am craving for some. Unfortunately, it is a bit too late to go out as the restaurants are already probably closed. This prompted me to go online and take a closer look at sushi and its origins instead. I know, reading about sushi is a very poor substitute to actually enjoying it as a meal but oh well, there is always tomorrow.

So where did sushi come from?

It seems that the art of sushi goes a long way back – all the way to the 7th century. According to Eatsushi.com, the Japanese adopted this form of pickling from the Southeast Asians. They put their own twist to it by wrapping raw fish in rice. The fermenting fish would then induce lactic acid production in the rice, which would then pickle the wrapped fish. Clever, isn’t it?

This practice, however, took too long. That is perhaps why, in the 17th century, vinegar became part of the recipe for sushi. This addition is attributed to Matsumoto Yoshiichi. Still, this version of sushi is not what we are used to today.

Perhaps the closest version of sushi that is quite popular around the world today is the one that emerged in the 1820s. This sushi version is attributed to Hanaya Yohei, who made use of sashimi and other seafood combined with vinegar rice. He served his delectable morsels straight from his sushi stall – much like what we order in Japanese restaurants today.

This hasn’t really helped my craving but I hope that the post was as informative for you as it was for me.