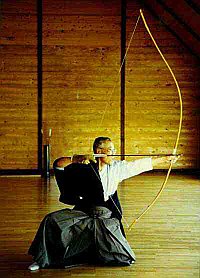 Kyudo, the way of the bow, is an art that grew out of the various samurai fighting techniques in Feudal Japan. Practitioners begin by visualizing how they will achieve their shots and perofrming the shooting motions without a bow. Afterwards they start to shootat a specially designed target called a makiwaraya, which is shot at close range. Then they can move on to shooting at targets from varying distances. The yumi used in kyudo is probably one of the largest bows in the world. They often exceed 2 meters, and are made from wood, bamboo, and leather using a method that has not changed in centuries. A kyudo practitioner dresses traditionally with a yugake glove made of on their right hand, the hardened thumb groove as an aid at drawing the string.

Modern kyudo is practiced primarily as a method of physical, moral, and spiritual development. It has been heavily influenced by Zen Buddhism, and this shows in how important the preparation for the shot is to the art. It is said of kyudo that the combination of the three elements of truth, beauty, and goodness forms a perfect shot. In the competitive sport of Kyudo hitting the target is not the only focus; the archer’s form may be judged as well. The act of drawing the bow and launching the arrow in the air seems simple to the uninitiated, but it requires countless repetititions and practice to attain that effortless grace.

There are around half a million kyudo practitioners in Japan, and a few schools have also sprung up in American and Europe. This meditative martial art have gained enthusiasts who enjoy the calm, reflective nature of the bow.