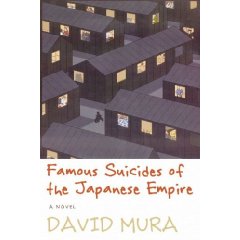 Hara-kiri? I am sure that you have heard of – or even used – this term before. This term is actually more formally known as seppuku, which referred to a form of Japanese ritual suicide by disembowelment. Seppuku was originally reserved only for samurai. Part of the samurai honor code, seppuku was used voluntarily by samurai to die with honor rather than fall into the hands of their enemies, as a form of capital punishment for samurai who have committed serious offenses, and for reasons that shamed them. Seppuku is performed by plunging a sword into the abdomen and moving the sword left to right in a slicing motion. (Source: Wikipedia)

In his book, Famous Suicides of the Japanese Empire, however, David Mura, dramatizes something else. He showcases the life of sansei, or third generation Japanese American. The main character is Ben Ohara, a sansei who is mired deep in a quest to find out what really happened to his father who died and his only brother’s disappearance. The Chicago Tribune has a review which narrates:

For Ohara, suicide begins at home. His father, interned during World War II, held his own shame as one of the so-called “No-No Boys,” a nisei (second generation Japanese American) who refused to join the American army and went to jail instead. That shame eventually led him to take his own life. Ohara’s brother, an astrophysicist with a drug habit, walks out into the Western desert, never to be seen again.

If you are interested in reading this book, you can get it from Coffee House Press for $14.95. It might be a good gift this Christmas.