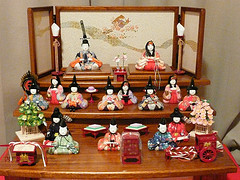 Japan is well known for its exotic festivals that attract people from all over the world. For the Japanese, though, these festivals hold much deeper meanings than merely showcasing what their culture has to offer. One of the longest running traditions in the Japanese culture is called the Hinamatsuri, or Japanese Doll Festival.

Hinamatsuri started way back in the Heian Period and has its origin in an old Japanese belief that dolls contained evil spirits. In the old days, dolls made of straw were sent floating down the river out to the sea. The goal was to send away the evil spirits.

Today, the festival takes on a different light and is celebrated on the 3rd of March. The festival is actually aimed at little girls, wherein the family prays for their happiness, safety, and prosperity. Those who take part in the celebrations display special dolls if they have girls in the family.

Another name for Hinamatsuri is Momo no Sekku, which translates to Peach Festival. The dolls which are displayed are called Hina dolls and they are placed on tiered platforms with following configuration:

• Sitting at the top center are Emperor and Empress. They are wearing the twelve-layered ceremonial robe called juhni-hitoe).
• On the next step stand three Court Ladies.
• On the 3rd step play five Musicians.
• On the lowest two steps are miniatures of tableware used to serve these people.
• Small set with Court house: two Warriors guard the Court people.
• On the right are peach blossoms.

This configuration actually follows the hierarchy of the Heian Period Imperial Court.