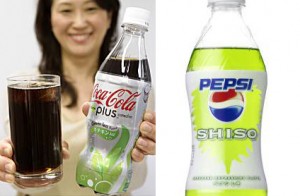 Why not? Coke comes in various flavors, or versions if you want to call it that. We have the regular Coke, then we have Coke Light, and then there is Coke Zero. I personally prefer the regular (REAL) Coke, but hey, each to his own, right?

In Japan, they will soon get another option – Green Tea Coke. Katsuya Sato, the spokesman for Coca-Cola Japan Co., said late last week that they are going to launch a new product on June 8. This “new” Coke is going to have some tea antioxidants called catechins. Adding the catechins to the soda will not only give it the benefits that antioxidants normally give, but also provide a tea-like aftertaste.

And what is the rationale behind this? After all, most people I know drink Coke not because they want to stay healthy. We all know that it is NOT really a health drink, right? Well, Sato says that they are trying to target women who are in their 20s and 30s, who may be health-conscious. And while Coke is not really a health drink, providing the option of a somewhat healthy version will cater to people who want their soda and drink it too!

By the way, Coke is not the only soda company in Japan taking this route. In fact, fierce rival Pepsi is also coming up with their own exotic drink: basil-flavored Pepsi. Now I don’t know about that. I have always liked Coke but I don’t mind drinking Pepsi when I have to, but basil-flavored soda? I’ll pass.