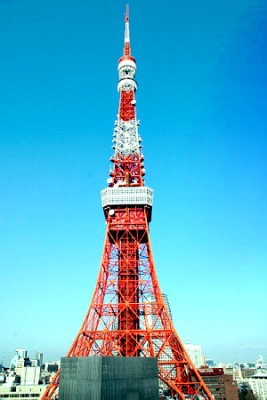 Tokyo Tower is one of the highlights of any visit to the city. At 333 meters (1,093 feet) it’s the tallest self-supporting steel tower in the world. Tokyo Tower is a must see in any tourist itinerary. The two observatories on the tower gives a panoramic view of Tokyo. The main observatory is located 150 meters, and a special one is at 250 meters up. On a clear and cloudless day you can even see Mt Fuji. It also has a wax museum, an aquarium, a Trick Art Gallery, and a cafe at the observatory.

Tokyo Tower was built post-WWII Japan, and opened to the public in 1958. It was built by the Takenaka Corporation at a total cost of ¥2.8 billion. Though it’s modeled after the Eiffel Tower in France, it weighs only 4,000 tons, lighter than its model by 3,000 tons, thanks to advance in steel manufacturing and construction technology. Its unique orange and white color is due to air safety regulations, to make it visible.

Tokyo Tower is a well-known landmark that appears in movies, anime and manga. It has been destroyed in Toho’s monster films, and the setting for numerous dramas and movies. Tokyo Tower’s primary purpose is as a broadcasting relay station for several radio and television stations like NHK.

Its days as a broadcasting station are numbered with the construction of the Sumida Tower underway. This 610 meter tower, sometimes called the New Tokyo Tower, will be completed in 2011. For anyone who’s worried of the future of the tower, on December 2008 it’ll be eligible to become a state-designated cultural property. If it’s approved, it’ll join Nagoya TV Tower in the list.