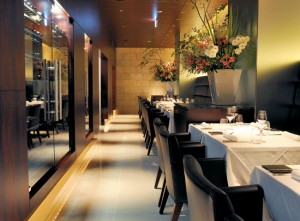 While people from all over the world usually go to Tokyo to indulge in Japanese cuisine (among other things), it is not a secret that the vibrant city is also home to little gems of restaurants offering other types of cuisine. And, believe it or not, you could get a sampling of decadent French-Japanese fusion in a cozy nook in Azabu-Juban – at the new restaurant Hortensia.
Featuring the creations of Chef Tetsuji Koga, there are countless reasons for anyone to pay a visit to the restaurant. For starters, Koga has already established a name for himself. He started out at the legendary Tableaux in Daikanyama, and then moved on to Restaurant J several years later. He then served as executive chef at Breeze of Tokyo in Marunouchi, where he really gained popularity. His reputation only skyrocketed further when he worked for Edition Koji Shimomura in Roppongi, which is of two-starred Michelin fame. Today, his fare can satisfy the most discerning of tastes at Hortensia.

The restaurant is open for lunch and dinner, and is surprisingly affordable. For only 4,750 yen (inclusive of tax), diners can choose four dishes from the menu. Whatever you feel like eating – appetizers, main courses, or desserts – you can pick out from the menu. Dinner is a bit pricier at 8,400 yen (inclusive of tax) and the choices have to be two appetizers, one fish dish, one meat dish, and one dessert.

After dinner, the whole place takes on a different character and transforms into a wine bar. They have a pretty decent wine list – what else can you expect from a French-inspired restaurant?

What gives Hortensia an edge is the skill and preferences of Chef Kogi, who incorporates local influences into his cooking. He also has a propensity for making use of seasonal ingredients, making sure that guests have something new to look forward to even after several visits.  Delectable Fraponese cuisine is what awaits you when you pay Hortensia’s visit.

If you find yourself hankering for French cuisine while in Tokyo, make sure to head out to Hortensia: