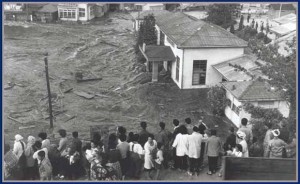 Nations all over the Pacific region braced for the arrival of deadly tsunamis in the wake of the 8.8-magnitude earthquake that rocked Chile Saturday. In Japan alone about 640,000 families were evacuated from coastal regions due to the tsunami alert. The Japanese government also stopped rail operations and blocked highways that could possibly be affected by the arrival of tsunamis. Fortunately the prediction of 9-foot (3-meter) waves in the northeast coast has, so far, not materialized. Tsunami waves did hit coastal regions in Japan but compared to what they have prepared for the waves are considered inconsequential. However, the Japanese government are taking no chances and will wait a few more hours to observe what will happen before the Meteorological Agency will lower the warning.

Japan is no stranger to tsunamis and is obviously one of the countries most often affected by this natural disaster since the word tsunami itself is a Japanese term. Japan has a very good emergency system in place for events like earthquakes and tsunamis, being frequently affected by these. They were especially wary of the possible effects of the recent earthquake in Chile having suffered from lethal tsunamis generated by a 9.5-magnitude quake in Chile in the 1960s. The 1960 tsunami reached Japan 22 hours after the quake hit Chile and resulted in approximately 2800 homes destroyed and more than 140 dead and/or missing persons.

Other countries that issued major tsunami warnings but now are breathing sighs of relief include Hawaii, Australia, Russia, and Philippines.