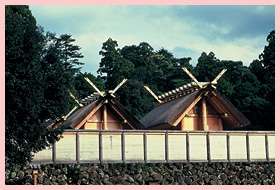 Izumo Taishi may be one of the most frequented and popular Shinto shrines in Japan, but so is Ise Jingu. The official name of this Shinto shrine is actually Jingu (translated into The Shrine). However, many tourists refer to it as Ise Jingu, perhaps due to the fact that it is located in the city of Ise, which is in the Mie prefecture, about 2 hours from Nagoya.

So why is Ise Jingu worthy of a visit? This shrine is arguably the most significant of all the Shinto shrines in Japan. It is considered the most sacred shrine in the country. It is important to note, however, that Ise Jingu is actually a large complex composed of countless other shrines. It has two major shrines, the Naiku (or Inner Shrine) and Geku (or Outer Shrine).

Amaterasu Omikami, the sun goddess and supposed ancestor of the Japanese Imperial family, is housed in the Inner Shrine. This is precisely why the Emperor of Japan ceremoniously pays a visit to this shrine on special occasions, such as when he ascends to office. Just how old is this shrine? Just about 2000 years old. The Outer Shrine, on the other hand, houses Toyouke no Omikami, the goddess of harvest. It is newer than the Inner Shrine and is normally visited first.

Ise Jingu is a large complex and in between these two major shrines, you can visit hundreds of other shrines. That is why it is highly suggested that you allot time for a visit to this special place.