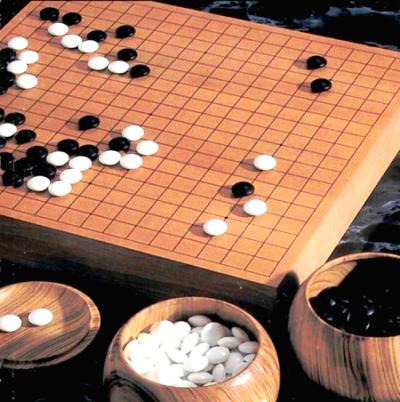 A few years ago a series called Hikaru no Go revived interest in the game of Go among the Japanese youth. I must admit I learned Go because of how it was shown – as a challenging and elegant game with infinite variations. Go is a deeply complex strategic game of territory between two players, and is often compared to the Western game of chess. The only things you need to play are a go board, a set of black and white go stones in their respective bowls, and a few hours of free time. After you learn the basics, you’re sure to want to keep playing for hours.

These are the rules to this game:

Though these are the only rules to the game, they open up a world of possibilities limited only by the players’ imagination. At the end of the game all of the free liberties surrounded by one player’s stones are counted as their territory. Their captured stones are counted against that, and whoever has the most territory wins.

I’ve fallen in love with this game since the first time I laid a stone on a go board. Try it, and you just might fall in love with it too.