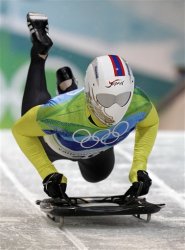 Skeleton racing is probably not the most popular sport around, but it does have its own pack of supporters. Now that the Winter Olympics is the hot topic in sports, skeleton racing is gaining more notice, especially in Japan. By general consensus, Kazuhiro Koshi is regarded as the pioneer of skeleton racing in his country. Now 45 years old, the veteran says that he has “reached his limit.” From what has happened in the Winter Olympics, it looks like he just might be right. On the 19th, the competition for skeleton racing ended with Koshi finishing a mere 20th – overall. Despite this sad showing, Koshi remains positive and his fans continue to voice their support.

Koshi’s story is quite an interesting one. The Examiner tells us more:

Kazuhiro Koshi started off with dreams of Olympic gold out of university. Born in Nagano, the home of the 1998 winter Olympics, Koshi undoubtedly grew up surrounded by winter sports. He originally aimed to become a bobsledder for the 1992 Albertville Olympics, but after failing to be selected he switched his focus to skeleton.

However, at the time he decided to change it is reported that there were virtually no serious skeleton racers in Japan. In order to advance to an international competitive level, which he finally did by the late 1990s, he had to take advice from experts in foreign countries and train rigorously.

This man’s spirit is undoubtedly admirable and as he announces his plans of leaving the life of competition, we wish him well.