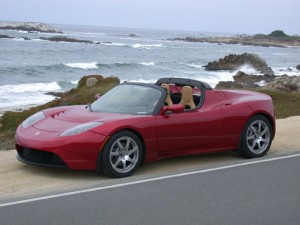 The environment-conscious Japanese are about to receive another treat: electric sports cars. Recently, I wrote something about electric cars hitting the market in the very near future. Now, it’s more than these Japanese electric cars that is getting me (and a lot of other people) excited.

Tesla Motors Inc. has announced its plans to launch one of their electric sports cars in Japan! Tesla is an American car maker that specializes in electric vehicles. According to their official statement, they are launching the Roadster early next month. That’s pretty soon, especially since we’re almost at the end of April!

This is a big move by the American car maker, as Japan is well known to protect its domestic industries, and Mitsubishi and July are also releasing their own electric vehicles this year. While it means stiff competition for the car makers, it means more choices for the Japanese people.

The Roadster is a high-end sports car – a two-seater right-hand drive. Its rate of acceleration is 0 to 100 kilometers per hour in 3.7 seconds. For an electric vehicle, that is not bad. Not bad at all!

The only drawback to Tesla’s Roadster is that the price will be about double the selling price in the United States. It’s currently selling for USD 101,500 (9.4 million yen) in the United States, and it will go for about 18 million yen when released in Japan. That is quite a considerable sum, ensuring that the Roadster will probably not be a common sight on the roads.