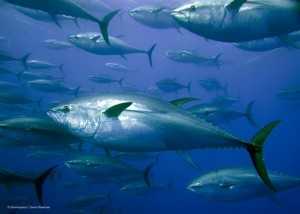 Japanese food is known around the world for being only the best. While that is generally accepted wherever you go, Japanese cuisine does have its controversial points. Perhaps one of the most controversial things right now is the bluefin tuna. Think sushi and sashimi – only the best kind. The bluefin tuna can fetch astronomical prices in the local and international markets due to its incomparable quality.

This popularity has led to the decline of bluefin tuna populations, and conservationists have been trying to get a ban – albeit temporarily – imposed on bluefin tuna fishing and trade. According to scientists, the population of bluefin tuna is in danger, and this fish just might very well become extinct if we do not do anything about it.

The Convention on International Trade in Endangered Species (Cites) was held in Doha last week, and countries took opposite sides of the argument. Naturally, Japan was on the side of continuing with the bluefin tuna trade. Not only does it involve business matters, but the bluefin tuna is an integral part of their cultural heritage. Japan did have a lot of support from other countries, and despite the influence of the European Union and the United States – who were leaning towards imposing a temporary ban – Japan emerged the victor.

There will be no ban on bluefin tuna fishing.

I can’t get over the idea, however, that we might end up killing all the tuna fish out there. And, when that happens, what are we to do?