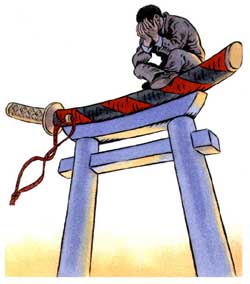 One of the most disturbing and definitely saddest facts about Japan is its high suicide rate. Many experts give different views about this phenomenon, but personally, whatever the reasons are, the alarmingly high number of lives lost in the country is very alarming and dampens Japan’s national spirit.

Today the Japanese government issued a statement about this subject, urging that there is a need to take on the issue as a society especially with the number of suicides exceeding 300,000 again for the ninth straight year. The World Health Organization actually ranks Japan as the country with the ninth highest number of suicide victims.

The announcement is part of the first counter suicide white paper that has been released this year. The governement is calling for more care for suicide survivors and support for the families who lost loved ones through suicide.

In its first “counter-suicide white paper” for 2007, the government recognized suicide as a death of a person driven to desperation and someone who is at the end of their rope and said it is necessary to provide care to survivors of suicide attempts as well as the bereaved families of those who have killed themselves. The white paper reflects the government’s concerns over the findings of the World Health Organization, which ranked Japan as the ninth highest in the world for the number of suicide victims per 100,000 persons.