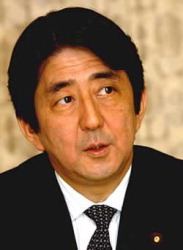 Shinzo Abe, newly-elected president of the ruling Liberal Democratic party, won against foreign minister Taro Aso, and the finance minister, Sadakazu Tanigaki, to become Japan’s new Prime Minister. He was elected during a session of both Houses of the Diet, and replaced former Prime Minister Junichiro Koizumi, who stepped down after five years in office.

Shinzo Abe began his political career in 1991 when he successfully ran to for the House of Representatives. He became the Deputy Chief Cabinet Secretary from 2000–2003, and after that was appointed as Secretary General to the Liberal Democratic party. He rose to national prominence in 2002 for his uncompromising stand as the chief negotiator for the families of Japanese abductees taken to North Korea.

Abe is the youngest Prime Minister to be elected in the postwar period at the age of 52. He comes from a line of politicians. His father, Shintaro Abe, served as Japan’s Foreign Minister under Yasuhiro Nakasone, and his grandfather was former Prime Minister Nobusuke Kishi. On assuming his office, Abe will have to deal with mending diplomatic relations with nearby countries and ensuring Japan’s economic recovery. Abe has pushed for revisions to Japan’s pacifist constitution.