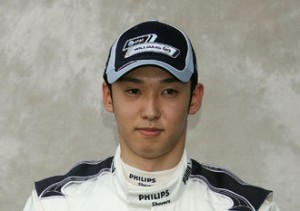 What is so special about the 28th of September this year? If you have been paying attention to Formula 1 on the news, you would know that history is being made as I write this. At this very moment, the very first F1 night street race is being held in Singapore and one of the drivers is Japanese.

Kazuki Nakajima drives for the Williams-Toyota team, together with Nico Rosberg. Nakajima was born in January 11, 1985 in Okazaki, Aichi, Japan. As a child, Nakajima was not a stranger to the world of racing. In fact, he was only 11 years old when he started Karting and a mere three years later, he was dubbed the champion of Suzuki Formula ICA karting. He was then subsequently snapped up by Toyota to join their Young Drivers’ Program.

Some say that he purposely went with Toyota despite his father’s strong ties with Honda, which is the former’s arch rival. The rationale is that he wanted to prove that his father has nothing to do with his success in his racing career. Well, he did prove that because in 2006, he started as a test driver for Williams and in October 9 of 2007, he finally got a break when he replaced Alexander Wurz as a driver for Williams. He drove in the final race in Brazil that year and finished in 10th place.

Today, Nakajima is a household name in the world of F1 racing. Though he has not made such big waves as the other drivers have, he certainly is someone to be proud of.