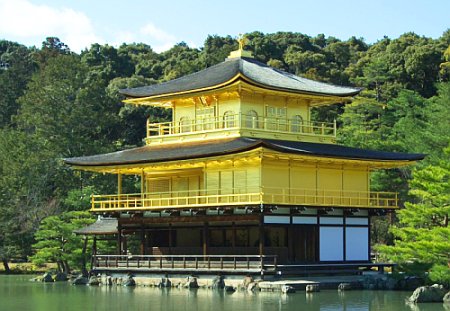 Kyoto has many beautiful tourist spots seeped in history. One of the best-known is the Kinkanku-ji, also called the Golden Pavilion due to the gold-leaf adorning the second and third tier of the pagoda. It is part of the grounds of Rokuon-ji Temple. Each floor is representative of a different architectural style. The first floor, called Hosui-in (Chamber of Dharma Waters), is built in the Heian style. The second floor, Cho-on-do (Hall of Roaring Waves), reflects the samurai aesthetic. This floor has an icon of the Buddhist Goddess of Mercy, Kannon. The top floor is Kukyocho (Firmament Top), is smaller and designed for intimate meetings and tea ceremonies. This floor holds the Amida triad and a set of twenty-five Bodhisattva.

The land was originally owned by Kitsune Saionji, but in the Muromachi period Ashikaga Yoshimitsu claimed the lands and built the pavilion in 1398. It was intended to serve as his retirement villa in 1398. A decade later his grandson rebuilt the pavilion to be a Buddhist temple for the Rinzai sect. The temple survived centuries of earthquakes and fires, only to be targeted by an act of arson. A 20-year old student set fire to the temple on July 2, 1950. He had intended to die within the flaming temple. This event became the central theme for Yukio Mishima’s fictional novel of the same name. It was rebuilt in 1955 and underwent rehabilitation in 1987.

Kinkanku-ji is situated right beside the Kyoko-chi pond, and its beauty is illuminated at night by floodlights set discreetly within the temple. Kinkanku-ji was designated a UNESCO heritage site in 1994. Tourists can visit everyday for a nominal entrance fee, and the area is open from 9am to 5pm. If you’re in Kyoto you must definitely put Kinkanku-ji in your itinerary. Whatever the season, the view is something worth visiting.