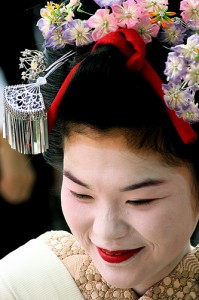 Women always value their crowning glory. To keep it healthy and looking good all the time, the hair needs to be combed or brushed depending on one’s preference. It is for this reason that women normally take the time to find a good comb or brush that won’t hurt their scalp and damage their hair.

Did you know that in Japan, the women there put great value on their combs (kushi) and hairpins (kanzashi)? Yes, this is true and the Japanese even have a festival for this known as the Kyoto Comb Festival held each year at the Yasui Konpiragu Shrine.

This event is being held annually to express the Japanese’s gratitude to their favorite used combs and ornate hairpins. First celebrated in September of 1961, the comb festival occurs at a comb grave mound called Kushizuka. It is where old combs are offered in the hope of bringing blessings to women in the form of a beautiful figure, hair and face.

Sponsored by the Kyoto Beauty Culture Club, this traditional Japanese event features lecture on traditional hairstyles and colorful costumes normally at 1 p.m. and a procession of women fully made up wearing traditional hairstyles from the ancient times (Great Grave Mounds) or about 1,300 years back to the modern era (Maiko). Members of the club use natural hair and create various types of hairstyles that require advance skills and techniques.

The procession starts at 2 p.m. after a ritual and covers Higashi-oji-dori going to the Kushizuka Tomb in the shrine precincts. At the shrine is where the ceremony to offer and dedicate old combs takes place. The black hair dance is then performed as a form of offering to the deities.

The Kushizuka shrine can be reached by taking the city bus 206 from the Kyoto Station and getting off at Higashiyama Yasui.

History of Comb Use

It was around 400 years ago when the Japanese turned their simple comb into an elegant beauty accessory that eventually became an artwork. The comb and hairpin were later used to express a woman’s character, marital status and social class. Since then, they have become an important part of the Japanese fashion and social culture.

In addition, the hairstyle symbolized different things. It tells of a Japanese woman’s social class, age, whether she’s single or married and whether she had any children.

The hairpin or kanzashi first appeared during the Edo period. It was at that time when women adopted elaborate hairdos to include the forepart, side locks and back hair.