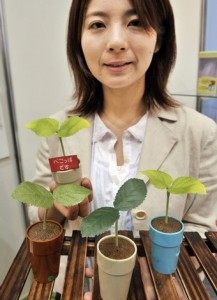 Do you live alone? Do you NOT relish the thought of coming home to an empty apartment without anyone to interact with? Or maybe, you live with other people who you do not really get along with, prompting you to go directly to your bedroom.

If so, then you might want to get yourself a Pekoppa toy, one of the newest hits in Japan. It is just like a small plant which is merely beginning to grow. Unlike any other plant, however, the Pekoppa toy can respond to the sound of your voice. Speak and you will be delighted to see its two leaves flutter or its stem bend towards you, as if acknowledging what you are saying.

The Pekoppa toy is the brainchild of Japanese company Sega Toys Co. Ltd. Since its release in September of last year, more than 50,000 units of the Pekoppa toy has been sold, attesting to its popularity. According to Minako Sakanoue, spokeswoman for Sega Toys, the Pekoppa toy serves as a psychological buffer for interaction for people of all ages. She is quoted as saying “If you have no subordinates who would listen to your grumbling in the office or no children who would talk with you, Pekoppa will be by your side, gently nodding.”

Though in truth, you know very well that the toy does not understand a thing you say, I can very well see how it can help some, psychologically. Later on, in June of this year, they will also be releasing a flower version dubbed Hanappa.