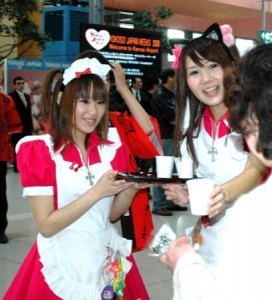 Remember the post we had a while back on maid cafes in Japan? I thought that the idea was novel and quirky at the same time. Well, those of you who are in the United States and who are not about to visit Japan in the near future will have the chance to visit one of these maid cafes. A firm has introduced the American version of maid cafes in California, with the aim of sharing the experience across the oceans.

Launched this spring, Royal/T in Culver City, Calif., offers not only the maid cafe experience made popular in Akihabara, Tokyo, but imports and introduces “Japanese cool” in the form of art, music, fashion and cuisine.

Susan Hancock, owner of Royal/T, fell in love with Japanese artists like Takashi Murakami and Yoshitomo Nara while a collector in New York and wanted to create a space to exhibit her passion for modern Japan.

There are certain differences from the original cosplays in Japan though:

While the cafe certainly caters to the anime and cosplay niche market, the venue equally emphasizes the art space and shop, thus veering from traditional genre cafes in Japan. And, unlike its Tokyo counterparts, Royal/T downplays the fetish aspect that Americans sometimes associate with cosplay restaurants.

Indeed, maids at this cafe will not blow on customers’ food or call them “master.” They will, however, eagerly chat about their favorite anime show and discuss the art collection.