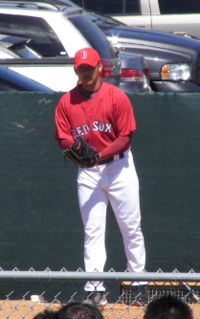 Japanese baseball fans all over the world had their stomachs knotted in anticipation when Japan’s most successful pitcher faced off with Japan’s best hitter at Fenway just yesterday. Torn between their two favorite players Japanese fans cheered for either Daisuke Matsuzaka and Ichiro Suzuki while many who couldn’t make up their minds ended up cheering for both. The “battle” between the two ended with Ichiro grounding out to Matsuzaka.

Daisuke “The Monster” Matsuzaka joined the Boston Red Sox December 13 of last year. He has quite a repertoire of pitches but his “best pitch” is considered to be his screwball-like changeup.

Ichiro Suzuki, known all over simply as Ichiro, moved to the US in 2001 playing for the Seattle Mariners. He is known to be one of the best defensive outfielders in baseball and has won a Gold Glove award and is part of the All-Star selection in each of his first six years in the majors.