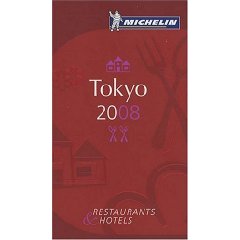 If you are not convinced that Japan is one of the places that you simply have to visit, then this just might help you get off your bum and hop on a plane to Tokyo. You have probably heard of the Michelin guide, a series of books published yearly which is oldest and best known guide when it comes to hotels and restaurants. They award Michelin stars, which measures the quality of the establishments.

This year’s Michelin guide is focused on Tokyo, one of the most popular cities in the world. The research that went into the making of this guide is quite impressive. They hired Japanese experts to work with the Europeans in order to give the finished product a Japanese context. And the results?

Michelin found Tokyo to be even better than Paris, which has always been touted as the food capital of the world. The Herald Tribune reports:

It found much to like, even love, and showered the city’s restaurants with more of its coveted stars than those in New York and Paris combined. Michelin, based in France, made the splash it had hoped for and has sold more than 290,000 copies of its familiar red-colored guides since November.

Some Japanese chefs, however, do not seem to appreciate the attention lavished on them. In fact, some have been heard to say that they do not need an outsider’s approval for their work. As for me, I just want to experience the best that Tokyo can offer in terms of food, don’t you?

If you want to buy this guide, check out Amazon.