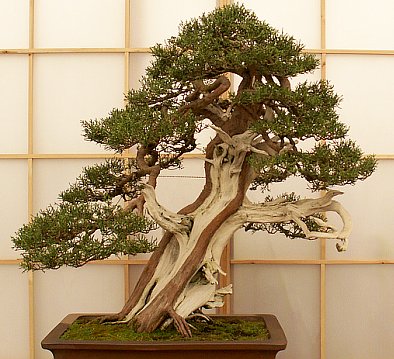 Bonsai as an art form was introduced from China. The Chinese form is called penjing, and often drew inspiration from mythical animals and imaginative scenery. When these miniature trees were brought over to Japan they became a hobby for the elite and the aristocrats. It was during the Edo period that the term “bonsai” was universally used.

Whereas the Chinese try to capture contrast in ying and yang, the Japanese bonsai is influenced by Zen Buddhism. Raising one is a meditative experience while the grower attempts to express the truth and beauty of nature.

The kinds of bonsai

Bonsai can be classified by the way the tree has been shaped or by their size. There are five kinds of bonsai: upright, semi-upright, slanting, cascade, and semi-cascade, though variations exist within these. Each of them represent the way a tree grows in nature while affected by the elements. Upright bonsai mimic the trees growing with plenty of light and air, while swayed branches and the cascade of leaves can evoke the scenery by the cliff or bodies of water. Sometimes two or more trees are planted together in one tray to represent a stand of trees in the forest. A special class of bonsai is called the literati. Inspired by Chinese painting of pine trees that grow in harsh climates, these have a contorted primary branch and a small crown of branches placed high at the top.

Bonsai can also be classified by size. The smallest bonsai are called shito, and can be small enough to fit into a pot the size of a timble. The largest could require several men to move them. Popular choices to use for bonsai include pines, maples, junipers, and flowering plants like azaleas and cherries. These are grown outside, and brought in on special occasions to evoke the current season. A bonsai is never truly ‘finished’ as it is a living plant, and will keep on growing and changing.