Mascots have long been known to be one of the most effective forms of advertising. They seem to have a longer and stronger effect on the recall value of a product or service and many companies are utilizing mascots to benefit their advertising campaign. In Japan, even mascots come in quirky – and sometimes controversial – forms.

Take for instance this modern day Buddha boy, which is the mascot created for the 1,300th anniversary of the relocation of the old capital to Nara. 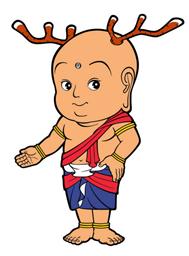 The little boy is obviously a representation of a young Buddha while the antlers are supposed to stand for the deer that the Nara Park is famous for. I don’t think I have to explain why the mascot is creating quite a stir. For some people, the mascot is quite cute while for others, they feel that it disrespects Buddha. I will not even attempt to pass judgment here but in terms of attracting attention, however, I believe that it has more than achieved its goal.

How about the mascot Marimokkori, a character that is supposed to represent round green algae? He was created for Hokkaido. 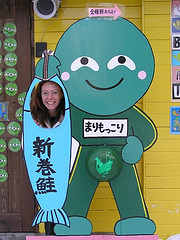 Well, he is green…and he looks round…