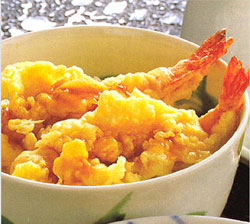 I have been craving for more Japanese food so after some feasting at my local haunts, I headed for the Japanese supermarket with a mission: to create an authentic tempura– which is an archetypal Japanese food. All the essential qualities of Japanese cuisine are reflected in its preparation: the use of absolutely fresh ingredients, the artful presentation, and the perfection of technique by a skilled chef. The result is one of the triumphs of Japanese cooking — a fried food that is light and fresh-tasting rather than heavy and greasy. It’s a cooking style in which the essence of the ingredient itself completely defines the taste.

It comes as a surprise to most foreigners to learn that tempura was not originally a Japanese dish; it actually owes its origins to the visiting Portuguese missionaries of the sixteenth century. But tempura, like many imported ideas, gradually adapted itself to Japanese needs and tastes. By the late nineteenth century tempura was a popular fast food in Tokyo, sold from sidewalk stalls and roaming pushcarts, and today’s modern tempura (made by deep-frying vegetables, fish and shellfish) is no longer a foreign food at all, but a completely Japanese cuisine.

Seafood and vegetables are the raw materials of tempura, and only the freshest specimens are used. It’s not unusual to see live shrimps jumping around on the preparation counter, or buckets of slithering eels being carted through the kitchen. In addition to using the freshest ingredients, the next most important factor in good tempura is the quality of the batter, which is made from eggs, flour, and ice water. The batter shouldn’t be mixed too thoroughly, but should be lumpy and full of air bubbles. To achieve this consistency the batter is made up in small batches immediately before it’s used, and each batch is thrown away when it starts to settle.

The vegetables and seafood are cut, washed, dried, and dipped in the batter to give them a thin, almost transparent coating. After this they’re dropped one at a time into the oil (a combination of vegetable and sesame oil), which must be constantly kept at exactly the right temperature. Finally, the tempura must be cooked for just the right amount of time, pulled out of the oil the precise moment it’s done. If all goes well, the final product is perfect tempura — crisp, golden brown, hot, and delicious.

A few tempura restaurants offer variations on the basic recipe, adding extra ingredients to the batter to change the texture or flavor. One variation is to add chopped noodles to the batter for a rougher and crisper coating.

As you can see, making tempura is a delicate process, and lots of things can go wrong. It’s possible to find many different levels of quality in restaurant tempura, ranging from fairly bad (too greasy) to absolutely perfect (heavenly). As a general rule, tempura tends to be better at specialty restaurants rather than at all-purpose Japanese restaurants.

Before you dig in, remember some etiquette. The first rule of eating tempura is to get it while it’s hot. If you’re sitting at the counter, the chef will transfer each piece directly from the vat of hot oil to the counter in front of you, placing it on a sheet of white paper to drain off the excess oil. Even if you’re sitting at a table, every effort will be made to get your tempura to you as hot as possible. You can show your appreciation by eating it as soon as you can (although you might want to wait a minute or two to avoid burning your mouth).

When you use the dipping sauce, it’s a good idea to dip the tempura quickly and avoid lengthy soaking. The sauce may come with a small mound of grated radish, which can be mixed in. Some tempura fans forgo the dipping sauce entirely, using just a bit of salt or lemon for seasoning.