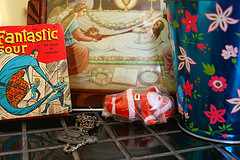 A flea market by any other name is still a flea market – and in Japan, it is called nomi no ichi. This traditional name is still used by the older generation in Japan but the young people use the global term flea market. Today, flea markets still abound in Japan, perhaps even more than in the past. This should not really be a surprise as the Japanese are known to be environmentally conscious, maybe more than some other nations today. They even have the word mottainai, which refers to the concept of recycling – reduce, reuse, and recycle.

As such, one can find most anything in the nomi no ichi – everything that the Japanese people deem reusable can be found here. Flea markets can be found almost anywhere in Japan. They are normally held during on the weekends, from early morning to late afternoon. The venue is usually on temple grounds and shrine grounds. According to the Japan National Tourist Organization, some of the most popular nomi no ichi in Japan include:

The next time you pay Japan a visit, try roaming these grounds and you might just find something to take home with you!