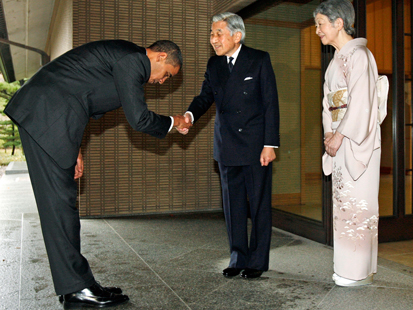 Barack Obama is no stranger to controversy – his whole presidential campaign revolved around that, if you remember. More so, this is not the first time that the President of the United States has showed deference to a leader of another country. Remember him bowing to the King of Saudi? Now THAT irked a lot of Americans.

If you haven’t heard yet, President Obama did a repeat of the bowing thing. This time, he bowed before Emperor Akihito, again generating a lot of buzz. Of all the articles, blog posts, and commentaries that I have been reading on this event, I found Jake Tapper’s most interesting. He writes:

“At their 1971 meeting in Alaska, the first visit of a Japanese Emperor to America, President Nixon bowed and referred to Emperor Hirohito and his wife repeatedly as ‘Your Imperial Majesties.'”

So what’s the difference between Obama’s bow and Nixon’s bow? The latter got it right – angle and all. Apparently, Obama’s angle was all wrong, and the addition of the hand shake was just NOT right. The overall effect?

Kyodo News is running his appropriate and reciprocated nod and shake with the Empress, certainly to show the president as dignified, and not in the form of a first year English teacher trying to impress with Karate Kid-level knowledge of Japanese customs.

The bow as he performed did not just display weakness in Red State terms, but evoked weakness in Japanese terms….The last thing the Japanese want or need is a weak looking American president and, again, in all ways, he unintentionally played that part.

I wonder what Obama thinks about the buzz that he has once again generated? What do YOU think about it?