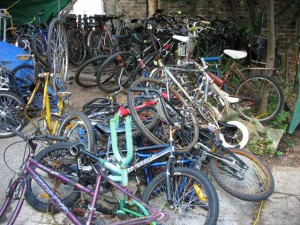 In Japan, many people have their own bicycles, and they use them on a regular basis. While this spells good news for the environment AND the health of the people who use their bikes, it also means tons and tons of old bicycles that are impounded. The sad truth is that many bicycles are picked up by parking police for one reason or another. And once impounded, many of the bikes are left unclaimed. Worse, they are stored in areas open to the elements, laying them to waste.

Enter people like Naomi Aoyama and Toshizo Takada. These two work for the Silver Jinzai Center, a nationwide organization that helps senior citizens find jobs which benefit the community. What Naomi and Toshizo do is to restore those bicycles found in impound lots. Once restored, the bikes are sold at the center’s recycling shop.

Mark, has you ordered this medicine? Do you satisfied? ! Online Canadian Pharmacy provides one of quickest and easiest ordering processes available oline today.

It’s actually a win-win situation, if you think about it. The city’s impound lots are cleared up, making space for other things. The old bikes are re-used instead of merely thrown away, making a positive impact on the environment. People like Naomi and Toshizo have jobs. Last, but not the least, people can buy good as new bicycles for a cheaper price.

This sort of endeavor just goes to show that with the right mindset and enough motivation, we can make a positive impact on the environment as well as our way of living. I wonder if this sort of thing can catch on in other countries as well?