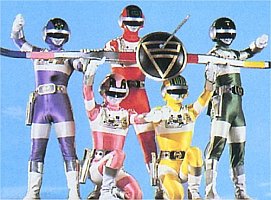 I grew up watching sentai shows during weekends. Sentai means “task force”, and refers to the team of costumed superheroes who battle against evil to save the world. Children love to watch sentai shows; they have snazzy special effects, fight sequences, and vehicles that turn into a robot they battle evil with. They can root for the good guys who will do everything to defeat the bad guys, and imitate trademark moves with their friends.

Sentai shows follow the same format each week. A group of skilled young men and women gain magical superpowers and fight powerful evil beings from a different planet or dimension. These enemies are intent on taking over the world, and only the sentai team can stop them. After a transformation sequence where they will wear a helmet and costume of their trademark color, the battle squad will face off with dozens of grunts to battle with a monster. Just as they’re about to defeat it, the creature will power up, becoming a gigantic version of itself that they can’t defeat. That’s when they use their special attack, summoning a robot that soundly defeats the monster.

Adults might find sentai shows campy and formulaic, but they give a clear message to the children. The children these helmeted fighters are their heroes, but these aren’t heroes that can defeat the bad easily. Their heroes can get hurt, telling them that no one is invincible. Another common thread of these episodes are the themes of friendship, teamwork and cooperation. Each member of the team has their own abilities and personalities, but they work together for a common good. They fight for justice in a world where the evil can win, but they strive on, believing that one day good will triumph. I believe this is one of the best messages you can give children in these uncertain days.