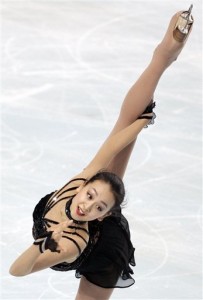 Well before the Winter Olympics begins, Mao Asada is already making her country proud. She has been under the spotlight again as she just got a fourth national title – straight. She was the world champion in 2008, but has since then met a series of failures, disappointing many fans. With this recent win, however, critics are saying that Asada is back in form, and that she is once again in the running.

Japan’s former world champion Mao Asada, returning to form with a fourth straight national title, is rekindling a hot rivalry with South Korea’s Kim Yu-Na ahead of their Olympic debut.

Asada nailed her trademark triple axel in the free skate to triumph at the Japanese championships on Sunday, prompting a nationwide sigh of relief for one of the country’s few gold medal hopefuls at February’s Vancouver Winter Games.

“It is important to aim high. I want the gold medal,” the 19-year-old said on television on Monday. “I will aim to perfect all of my programmes.”

It was the first time that the 2008 world champion has stood on the top of the podium in any event this season, which has been fraught with her failures in landing the highly demanding 3.5-revolution jump.

Her countrymen are definitely happy with her most recent performance, but Asada is probably the most fulfilled person at this point. This should be a good booster for her as she prepares for the Winter Olympics in February, which is just a couple of months away.