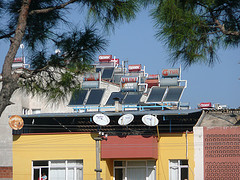 With the problems that we are encountering with fuel consumption and global warming, the best possible course for us to take would be sustainable source of power. We all know that solar power is one of the most feasible sources of energy and perhaps this is would be what the future holds for us. The Japanese government seems to think along the same lines.

Based on a report by Reuters:

The Japanese government will come up with measures on Tuesday to promote the household use of solar power systems by introducing subsidies and tax breaks from next year, the Nikkei financial daily reported on Sunday.

These include Sharp Corp, Kyocera Corp and Sanyo Electric Co.

Perhaps other countries in the West should study this example. It is never too early to start making use of more sustainable sources of power.