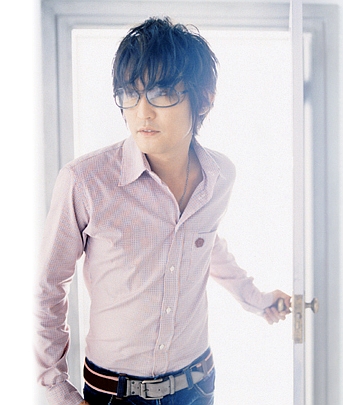 You might not have heard the name Suga Shikao before, but chances are you’ve heard his music. For the past year his work has shown up in movies and anime like Honey and Clover. I first heard Suga Shikao’s unique sound when I finally got to watch Boogiepop Phantom. The opening theme was his song Yuudachi (Night Showers) and had a soft, bluesy feel to it. I promptly forgot about him, but then I heard his songs were used for adaptations of two of my favorite series, xxxHolic and Death Note, so I looked for his singles and listened. And I’m glad I did! Suga Shikao’s sound is a funky and upbeat, yet soothing at the same time.

Being a musician is actually Suga Shikao’s second career. After graduating from a Tokyo university he worked as a salaryman in an ad agency for four years before releasing his debut album Clover in 1997. One might say that his experience in advertising honed his lyric writing. Since then he has released eight other albums and twenty-two singles in his ten year career. His latest album Parade reached the third place in the Oricon weekly charts. Suga Shikao is under Office Augusta, and he’s part of a group of artists named Fukumimi. This group also has Kyoko, Yamazaki Masayoshi, COIL, Hajime Chitose, and Araki Yuko.

Suga Shikao not only sings, he pens most of his lyrics. He’s also used his lyric writing skills for several collaborations, notably with SMAP and KAT-TUN. From the last part of 2005 to April of 2006 he also hosted a Monday night radio show at J-Wave called Night Stories and right now he’s writing a novel.