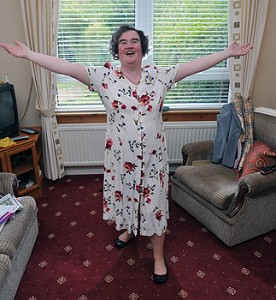 Japan gets more than its fair share of foreign celebrity visitors, especially when compared to its other Asian neighbors. This could be due to the reason that other nationals are already enamored with Japan and its culture to begin with. It could also be because the Japanese people appreciate artists and performers from other countries. Whatever the reason, we can always expect something big happening in this country, entertainment wise.

This week, it’s Susan Boyle who’s visiting Japan. She is there to be part of a TV show. Mind you, this is no ordinary TV show. In fact, it has been dubbed as the best local variety show in the country. More than that, Susan Boyle’s appearance in the show will be broadcast live all over the country on New Year’s Eve.

If you thought that Susan Boyle’s fame is limited to the western world, then you are mistaken. The Scottish singer was greeted at the airport by countless fans, all of the clamoring for a song right then and there. She declined, however, saying that they would have to wait for the show to be aired to see and hear her perform. According to the grapevine, she will be singing I Dreamed a Dream, the song which propelled her to worldwide fame.

Susan Boyle, the church volunteer, may not have won Britain’s Got Talent; no one can deny, however, that she has surpassed other contestants. And you know what? The Japanese are quite happy to be part of her success. I wish I had that show on my cable TV. It would be interesting to watch, don’t you think?