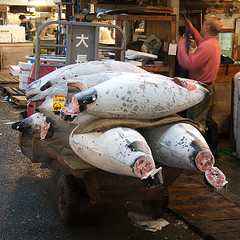 As you can probably surmise by now, my craving for sushi has not abated. This is due to the fact that I haven’t had the chance to get me some! In any case, I thought that it would be apt to talk more about sushi in the next few posts.

Did you know that there have been safety concerns regarding sushi? I suppose this issue is inevitable – raw fish, hello? If you do a search on Google or any other search engine using the term “sushi mercury” you will get a lot of results. This is because early this year, a lot of fuss was made over the levels of mercury that can be found in raw tuna, which is one of the most commonly used ingredients for sushi.

As recent as January of this year, MSNBC published an article detailing the potential dangers of this wonderful food:

Lab tests commissioned by the New York Times found so much mercury in tuna in 20 Manhattan restaurants and stores that eating six pieces a week would exceed acceptable levels set by the Environmental Protection Agency, the newspaper reported.

So should we be concerned? I don’t think so:

Sushi tuna is most often linked to high levels of mercury, but don’t panic if you’ve eaten a lot recently. According to the Food and Drug Administration, one week’s consumption doesn’t change the level of methylmercury in the body much at all. If you eat a lot one week, you can cut back the next week or two and you’ll be fine.

So there! The media sometimes makes too much of a fuss over a simple thing that shouldn’t really cause concern. The Japanese eat sushi A LOT and are they being poisoned by mercury? I think not!