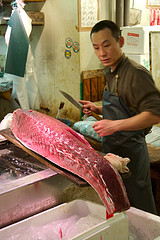 Alright, mercury I can take, but parasites? I have heard stories of people getting sick because of parasites but I have always thought that they were merely urban legends. When I ran across Ross Christensen’s series of posts on “How Safe Is Your Sushi?”, I realized just how serious this issue can be. In the course of my research, I also ran across other articles with opposing views.

• Order sushi from reputable restaurants, where the restaurant and fish provider follow food safety standards. You can ask if the fish has been previously frozen.
• Completely cooked is always the safest way to eat fish
• The FDA recommends that you don’t risk eating raw fish if you’re pregnant or have a compromised immune system.
• Don’t make your own sushi with raw fish unless you can freeze the fish for more than 72 hours at 4 degrees Fahrenheit.

On the other hand, Michael Vaughn is strongly opposed to eating raw fish himself:

It’s not that I’m opposed to it; I’ve just been working in the seafood industry for too long that the thought of eating sashimi and raw-form sushi gives me the willies.

That’s not to say that he discourages others from doing it. He has some nice tips in his article as well.

So it’s up to you. Should you eat raw fish? I personally think that if you like it, go ahead. You should just follow the suggestions provided by experts. The Japanese have been eating sushi all their lives – how many people do you know have had cases of parasite infection because of it?