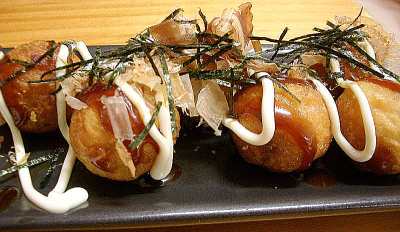 Takoyaki are fried or baked balls of batter with chunks of pre-cooked octopus in the middle, served with or without mayonnaise and sauce. If you ask any Osaka resident what food would characterize their region it’s usually listed along with yakisoba and okonomiyaki. Because of its popularity streets are lined with many takoyaki stands and most homes have their own takoyaki grill. Takoyaki are made with batter made with broth, pickled ginger, tenkasu (bits of fried tempura batter), scallions, octopus and a host of other ingredients. The batter is poured into the indentations on a hot, oiled iron takoyaki griddle. The octopus and the other ingredients are then dropped in the middle. Once the underside is cooked, it is skillfully turned with a pick-like tool, forming the ball.

An earlier version of takoyaki was choboyaki, which were smaller and had yam paste and green peas filling inside the batter balls. They were grilled on special pans with hemispherical depressions, giving the food its spherical shape. When vendors started using other fillings like meat it was known as rajioyaki, named after the most popular invention at that time. It is Endo Tomekichi who is credited with the creation of takoyaki in 1935. He was a rajioyaki street seller, and one day he decided to experiment with different fillings and added flavor to the batter. This became a hit, and the snack has since spread to different regions across the country.

Recipe
You will need a special takoyaki griddle to cook on.

Like okonomiyaki, you can add other ingredients, hiding it inside the balls of batter for a wonderful surprise.