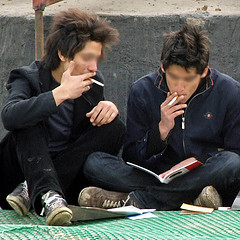 Do you remember the entry we had in April about the smart card that will, ideally, deter teenagers from purchasing cigarettes from vending machines? One of our readers, Jacl, commented on that post:

The only thing is … the machine will not “see” who is actually using the taspo card. If a minor is truly serious in trying to buy cigarettes, it wouldn’t stop the teenager from “borrowing” the taspo card from an adult and using it or finding some other creative ways around it.

Was he right! I was browsing Japanese-related news today when I ran across an article talking about a mother who lent her taspo card to her 15-year-old son! The article from AP goes:

Japanese police are demanding charges against a woman who allegedly lent her 15-year-old son an identification “smart card,” which is being introduced to prevent minors from buying cigarettes from vending machines.

The mother, 41, whose name was not disclosed because she has not been charged, lent her taspo to her son Monday so he could buy cigarettes to smoke in their home, a police official in southwestern Fukuoka prefecture said Tuesday.

Police have sent papers to prosecutors demanding charges of violating the law banning minors from smoking, he said on condition of anonymity because he was merely reading from police records. The maximum penalty is a 10,000 yen (US$96; €62) fine.

If parents themselves do not respect the rationale behind the taspo card, then I suspect that the Japanese government’s campaign may not be as effective as they had foreseen it. Then again, with prosecution as a possibility, then parents might think more than twice before doing something like this.