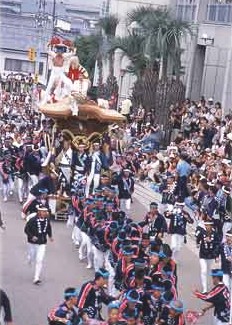 Osaka has many colorful and dramatic festivals, and one of them is the danjiri festival of Kishiwada City. The danjiri are large, moveable shrines carved out of the wood from the Japanese zelkova. In the middle of September, these shrines are gathered before Kishiki shrine and drawn by young and old alike with the use of towropes. All through August neighborhoods in the Kishiwada area practice to achieve the rhythm needed to pull these floats at breakneck speeds through the town until they reach the steep slope leading to Kishiwada castle. The practice began hundreds of years ago as a dedication to Inari, the fox god of the harvest.

If a danjiri procession encounters one from another neighborhood near an intersection, the two groups will race to see which one can take the corner fastest. These corners are the most dangerous part of the festival. It is a matter of team pride to never slow down before the corner, else the crowd would boo their performance. But a speeding danjiri can veer out of control and ram into a nearby building or telephone pole, crushing spectators and throwing the daikugata – the brave men who coordinate the movements of the float with fans from the shrine’s roof – to their deaths. Through the years the police and festival organizers have taken steps to ensure the safety of the participants and onlookers, and the number of accidents have steadily decreased.

The danjiri shrines are exquisive examples of artistry and craftsmanship. Making, carving, and decorating a shrine could take up to years even in the hands of skilled carpenters. But the final result can outlast generations of danjiri participants, if they survive their dangerous trip around the city each year. The survivng danjiri are displayed in the Kishiwada Danjiri Hall, where visitors can visit to see the festival’s history and exhibits. This year the festival is scheduled for the 16th and 17th of this month.