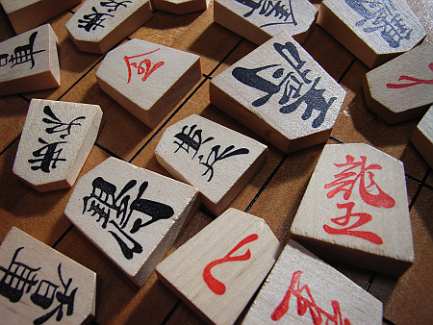 Shogi is sometimes called Japanese chess, or the general’s game. This game uses forty ranked pieces on a nine by nine board, and to win in the game you must either capture the king or put him in checkmate. The game begins with the two players’ pieces arranged in three rows on opposite sides of the board. Black begins and play alternates between the two players. The game differs from Western chess in two ways: all pieces besides the king and the gold general can be promoted once they reach the so-called promotion zone on the opposite side, and any captured opposing piece can be used in your army. Because of these differences the board remains crowded even in endgame.

Shogi uses five-sided pieces with its name written in Japanese characters on its back. On the reverse side a different set of characters are usually written in red; this is the promoted name of the piece. The different pieces have a set range of motion similar to chess, and all of these can capture an opposing piece – this is called a drop. Dropped pieces are not allowed to capture, but they can be promoted. Shogi requires a different sort of strategy from Chess, due to the extra set of rules. Defense is an integral part of play, and in the beginning a badly-realized attack can lead to your pieces being used against you. But in mid-game the focus shifts to attacking your opponent, trading pieces, and attempting to win by checkmate or concession.

Shogi is believed to have originated as a variant of the Indian chaturanga, though the date of its arrival in Japan is disputed. It is known that in the Heian period (794-1185 AD) a text on calligraphy, the Kirinshô, describes how to write the characters on shogi pieces. It was then refined to its present form during the Tokugawa era, when it was played before the shogun. Today shogi is played by millions of amateurs, and interest is growing each year. Shogi can now be played online through different sites and servers.