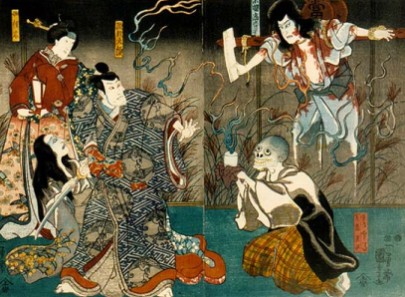 Though summer is almost over, we have yet to mention one of summer’s traditions: the telling of ghost stories. Ghosts stories in Japan are told during hot summer months, especially on August. This is based on Japanese Buddhism, where August is the season of Bon, and the gates to the spirit world open. These ghost stories can help you forget the oppressive heat, and a well-told one can send chills down your spine. These tales often talk about the obake, the traditional ghosts, spirits and goblins of folklore. The word obake literally means a transforming thing, and points to the transformation of the spirit into a supernatural being. Obake fall into three broad categories:

Yuurei are the spirits of the dead. They are often portrayed wearing a white kimono and with their legs trailing into faint wisps. These ghosts are drawn to haunt their loved ones, out of unrequited love, sorrow, or a hunger for revenge. Yuurei can be laid to rest by performing rites or helping it resolve its unfinished business.

The youkai encompass a wide spectrum of ghouls, goblins and monsters. Some youkai are the transforming animal spirits like the tanuki and kitsune, the long-nosed Tengu goblins, and the reptilian Kappa which live in isolated lakes. These spirits have different agendas in interacting with humans, though some prefer to live away from the humans.

Oni are not considered to be youkai, but these ferocious creatures from Buddhist theology are often included in the list of obake. Oni have duties like manning the gates of the different Buddhist hells and scaring the wicked to death.

Even if the traditional ghost stories of the youkai and yuurei are slowly being supplanted with Westernized horror stories, they have a timeless appeal that makes you want to share them to others. So before the summer truly ends, gather your friends, and share ghostly tales as the sun sets.