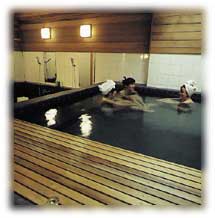 The Japanese live in relatively frugal homes and apartments and, while the tide is turning, there are still many people who rent cheap apartments without any bathing facilities whatsoever. This is not considered a great inconvenience, since one of the finest bathing experiences that life has to offer is provided within a few blocks at the local public bathhouse, called either ‘SENto’ or ‘oFUro-ya-san’. Traditionally the local social meeting place, the sento is still a great place to relax and unwind on a nightly basis; and the Japanese do religiously bathe nightly.

As more and more people can afford their own private bath, and as some more modern people turn to using a shower instead, the public bath house became an endangered species. But they have struggled back to popularity by renovating to provide better and more sumptuous facilities. Many people who have the convenience of a nice bath in their own homes still return to the public bathhouse regularly for the sheer pleasure of it.

By the way, until the oil crisis of the early 1970’s, public baths in Japan were open for two sessions in both the morning — from about 10am to 1 or 2 — and again in the evening — from 4 to 11 or 12. (Those were the good old days! … yeah, I was there) But now there is only the evening session, and people who work during those hours are out of luck if they don’t get a “bath break” from work.

While modernization has improved many old sentos, they can usually still be located by looking for the tallest “smokestack” in the neighborhood. Otherwise, the bathhouse is recognized by its large noren (shop curtain) over the doorway with the single phonetic character “yu”, ( meaning ‘hot water’) writ large; and also by the large number of shoes left in the open entryway — ladies’ shoes to one side, gents’ to the other.

That makes it easy to determine which side you should favor, even if you can’t read the ‘men’ and ‘women’ signs. Right there in the entry way you will find little wooden or metal lockers where you can leave your shoes in return for a little metal key, in case you don’t chance leaving your shoes out in the open. But most people just wear little wooden or plastic slippers to the bath house; you can hear them clogging noisily down the street toward the bath in the evenings. Everyone has a little plastic tub under their arm. While tubs are always provided, it is usual for locals to bring their own tub with their soap, shampoo, razor, towel, wash cloth and whatever is needed for the bath, except the stool.

After removing your shoes in the entryway, you step up, temporarily slip into some plastic slippers and approach the superintendent, who takes your money. His or her little podium is just inside, at the entrance to both the men’s and women’s dressing rooms, which can both be more-or-less viewed from that vantage point. Inside the dressing rooms are lockers where you can stash your clothes as you undress. Again there is a little metal key with an elastic band that you can wear around your wrist or ankle. Some people don’t bother locking up.

Also in the dressing rooms are large mirrors, sinks, hair dryers, and almost always a ‘massage chair’ for the magic fingers. There will also be scales, a cooler case with soft drinks, a number of Japanese comic books and magazines, a case with various toiletries for sale, and a couple of fans going full blast to cool you down. There may also be a TV and a small lounge area with a table and chairs where you can sit and read while waiting for your spouse or friends. The space is not huge, but it is all there. There will be a toilet off of each dressing room.

Beyond the dressing room are frosted glass sliding doors leading to the bath areas. Into this area you take your little plastic tub full of toiletries, your little towel, and nothing else. The baths fill most of the large room, with rows of water taps all around the walls. Once inside, you grab a small stool off the stack (and a tub if you didn’t bring one) and find an unoccupied station with water taps. You plop yourself down, arrange your things on the shelf in front of you and begin to wash.

There will be a mirror staring you in the face, and both men and women use the evening bath to shave. You will find both a hot and cold water tap, and if it is at all nice, a separate shower nozzle over your head. Washing is no different than in a private bath; you’re on your own. Your neighbors will be washing only a foot or so to each side of you, but they don’t exist unless you want them to; however small, you can have your private space. You can also ask about the baseball scores or chat about the weather if you’re feeling friendly.

While you’re there, have a look around. In some parts of town, the men’s bath may sport any number of fantastic body tattoos, belonging mainly to the local mafioso. Their ladies do not often favor such embellishments, or so I am told. Most sentos are ‘local’ and neighborhood people meet there and often talk over the day’s happenings.