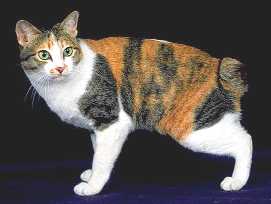 The Japanese bobtail is a medium-sized, affectionate and active cat, a good housepet for families with children. Their short and silky fur can come in a variety of colors. Some are pure white, black, or blue, but they can come in a mix of colors as well. Bobtails with calico fur (called mi-ke or tri-color in Japan) are often featured as the maneki-neko, the beckoning cat, in front of stores.

Japanese bobtails have litters of around three to four kittens. They are usually short-haired cats, but occasionally a long-haired kitten is born in the litter. Sleek and elegant, at rest, they go stir-crazy without attention. Anyone who wants to own a Japanese bobtail should be ready to play games, and they can be taught to fetch and pounce. Or spend some time talking to them and hearing them reply in their soft voices.

There’s a legend about how the Japanese bobtail got it’s stubby tail. In olden times Japanese bobtails had long tails, just like any other cat. One cat was sleeping too close to the hearth and set its tail on fire. It ran through the the streets of the Imperial city, setting the houses on fire and destroying the city. In anger, the emperor decreed that all the cats must have their tails cut short, so that it may never happen again. Actually, every bobtail’s tail is unique. Each kink, curve and bend are different from cat to cat. Because of the longer tail fur they look like little pompoms attached to the end of the cat.